On September 21, 2017, on the margin of the 72nd session of the General Assembly, the Minister of Foreign Affairs of the Republic of Belarus, Vladimir Makei co-chaired the Second Ministerial Meeting of the Like-Minded Group of Countries Supporters of Middle-Income Countries conducted by the initiative of the Foreign Ministers of Belarus and Costa Rica.

According to the World Bank classification, the category of middle-income countries (MICs) comprises 109 states in the world. MICs account for more than a third of global GDP and a quarter of world’s exports and imports. 73% of the world’s poor live in these countries. Belarus is among the top sub-category of upper-middle-income countries. In 2016 Belarus, Costa Rica and several other countries initiated establishment at the UN headquarters of a separate group of like-minded supporters of the interests of this category of countries. The group includes 13 states: Armenia, Belarus, Chile, Colombia, Costa Rica, Dominican Republic, El Salvador, Guatemala, Honduras, Jamaica, Mexico, Panama, Philippines.

The meeting adopted the ministerial declaration which sets the goals and objectives of the like-minded group, and a roadmap containing an algorithm for the main task for the coming period – the elaboration and adoption of a long-term UN strategy to support the sustainable development of middle-income countries.

Minister of Foreign Affairs of the Republic of Belarus chaired the working meeting of the State Parties of the Central European Initiative (CEI). 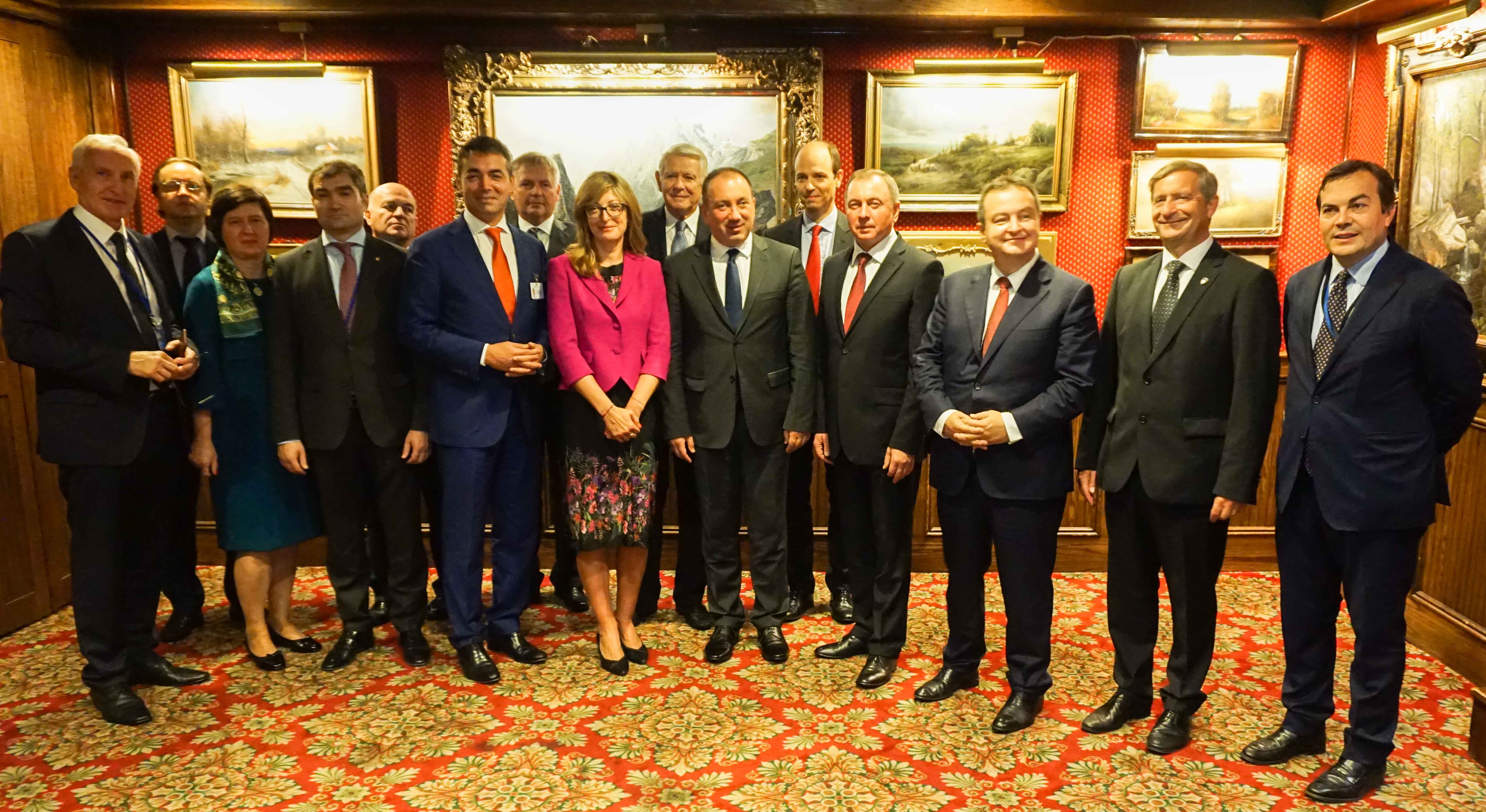 Central European Initiative (CEI) is a regional association created in 1989 with the purpose of strengthening European regional cooperation. It is composed of 18 states. Republic of Belarus presides in the initiative during this year.

Vladimir Makei emphasised the need for a deeper and more comprehensive regional cooperation on the issues of mutual concern.

During the event, ministers of foreign affairs discussed the results of the activities of CEI this year and highlighted the priorities for the next period.

While visiting the UN Headquarters, Foreign Minister met with the UN Under-Secretary-General for Counter-Terrorism Vladimir Voronkov. V. Makei congratulated the Russian diplomat on his appointment to a new position for the UN system, noting the special relevance in the world of topic of fight against terrorism. The Belarusian diplomat also proposed to organise a joint regional event with the UN in Minsk. 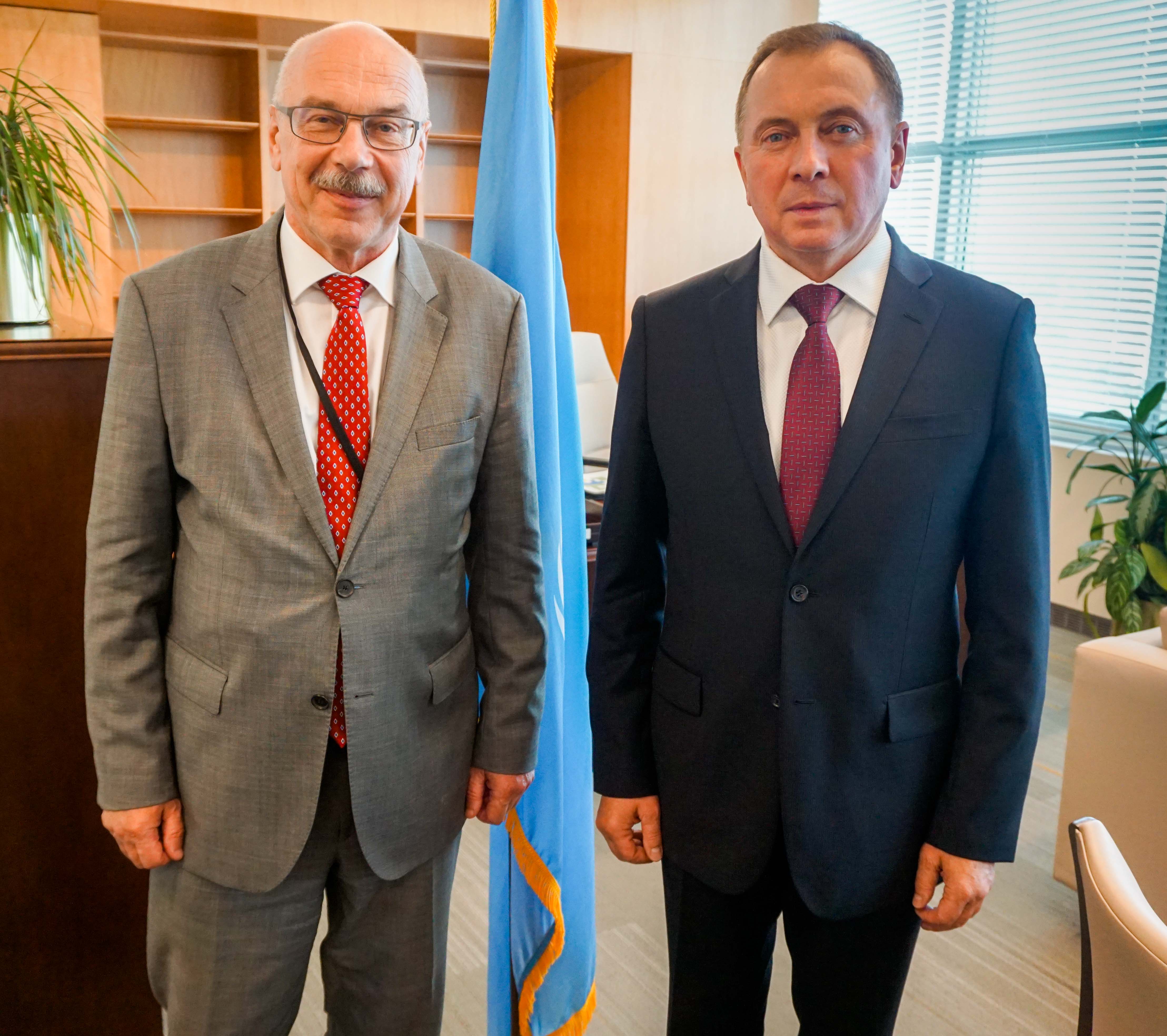 V. Voronkov, in his turn, expressed readiness to promote deepening of cooperation between the UN and Belarus, as well as to support initiatives of Belarus in this direction, both in national capacity and within the framework of the CSTO.

On the sidelines of the session a number of bilateral meetings were held.

During the meeting with the Minister of Foreign Affairs and Trade of Ireland Simon Coveney, the sides discussed issues of intensification of trade and economic relations, cooperation between Belarus and the EU, as well as within international organisations. The parties made special focus on issues of implementing investment projects of Ireland in Belarus. Minister V. Makei noted with gratitude the significant role of Ireland in supporting Belarus in overcoming the consequences of the Chernobyl nuclear power plant disaster. The sides underlined the mutual interest in developing cooperation between business circles of Belarus and Ireland. 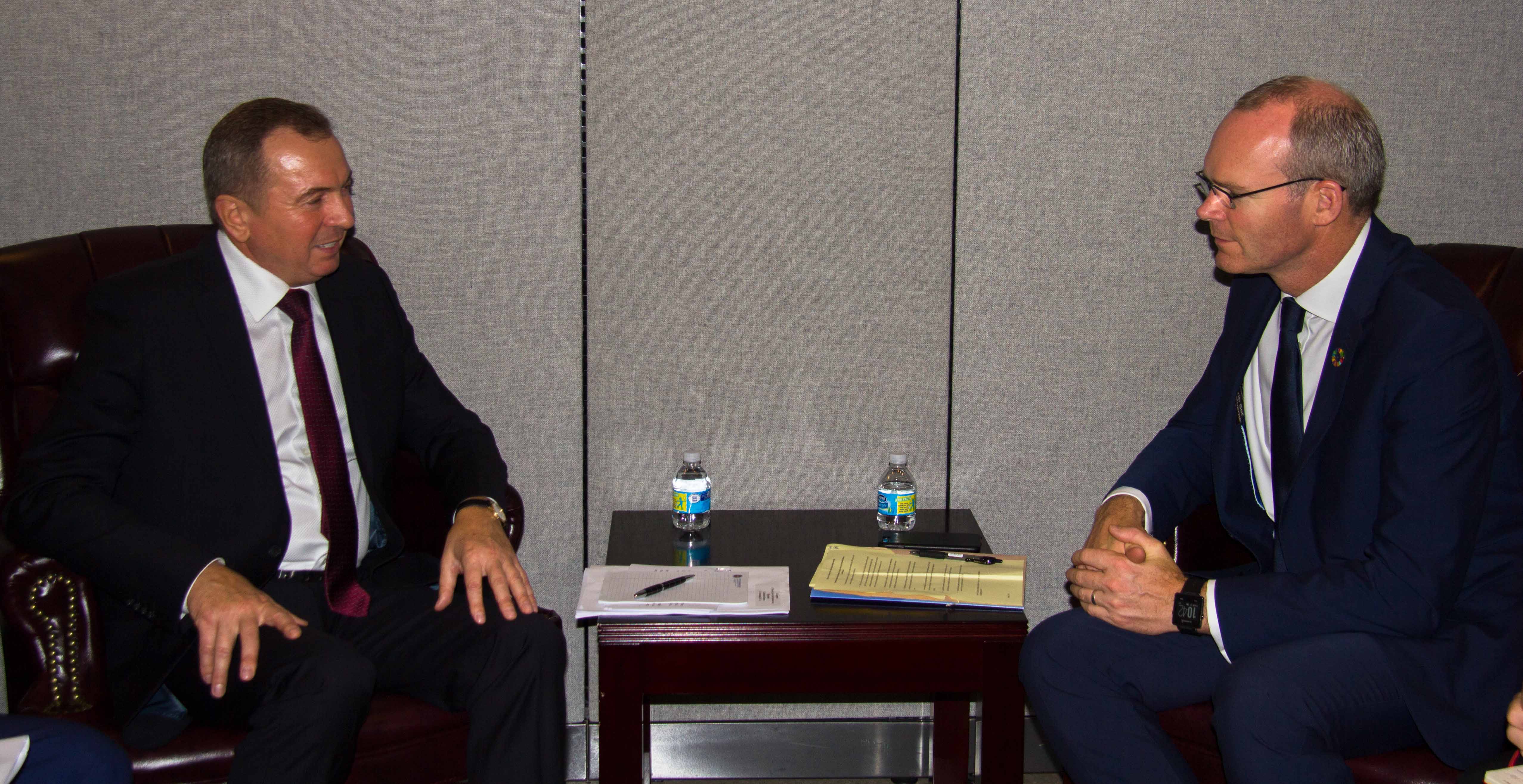 The focus of V. Makei's meeting with Swedish Foreign Minister Margot Wallström was on expanding cooperation, including within the framework of the Eastern Partnership. The Belarusian diplomat informed the Swedish interlocutor on the approaches of the country's leadership to development of small and medium-sized businesses. 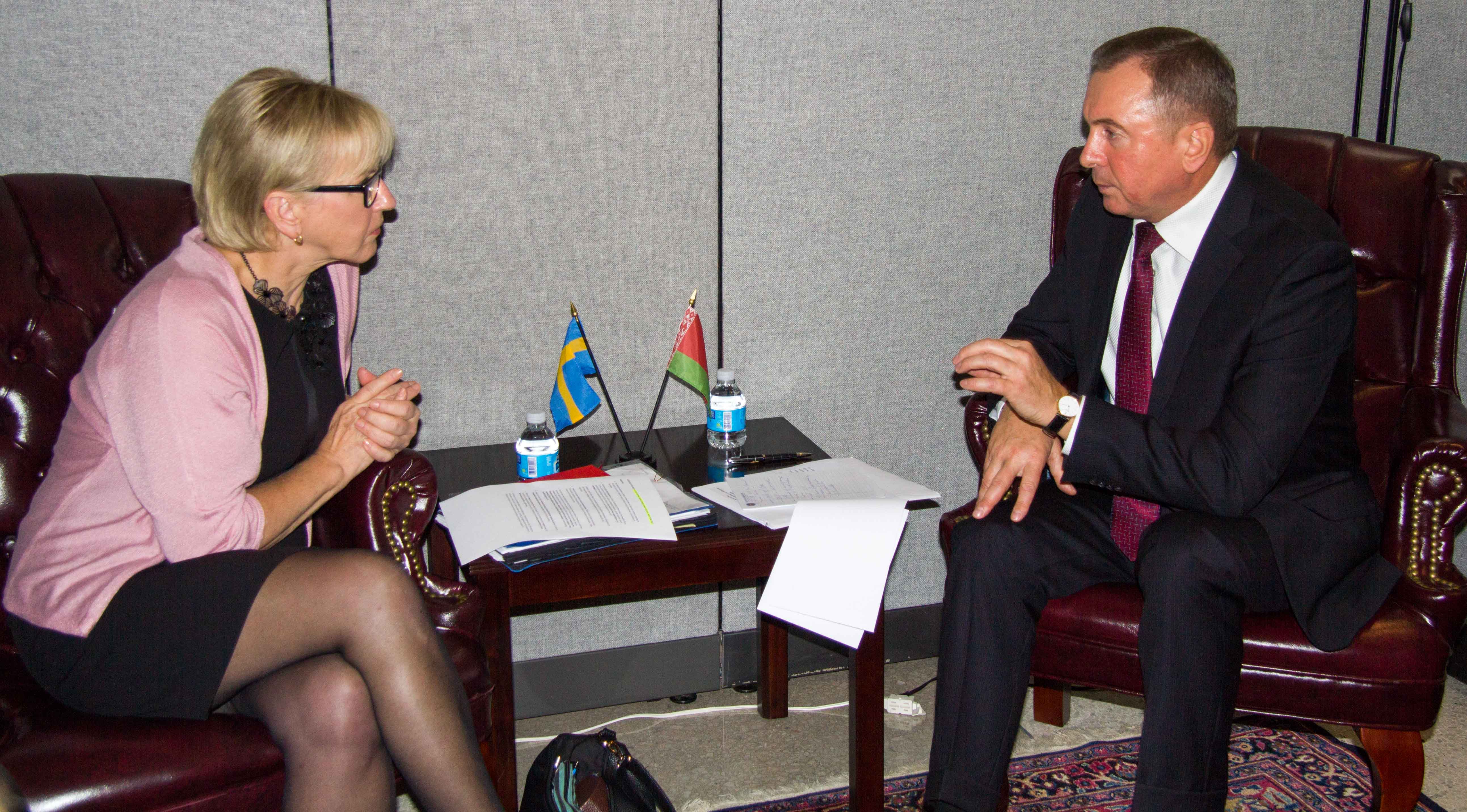 M. Wallström, for her part, expressed confidence in the interest of Swedish businessmen in long-term investment in Belarus. The interlocutors agreed that resumption of work of the Belarusian Embassy in Sweden contributes to improvement of quality of dialogue between the countries, and also agreed on a number of joint events for the near future. In addition, V. Makei and M. Wallström exchanged views on human rights issues.

At a bilateral meeting with Venezuelan Foreign Minister Jorge Arreaza, mutual interest in expanding cooperation was reaffirmed, and the need to conduct an inventory of arrangements reached earlier on the highest level was confirmed. The Belarusian and Venezuelan ministers discussed the schedule of upcoming high-level contacts. 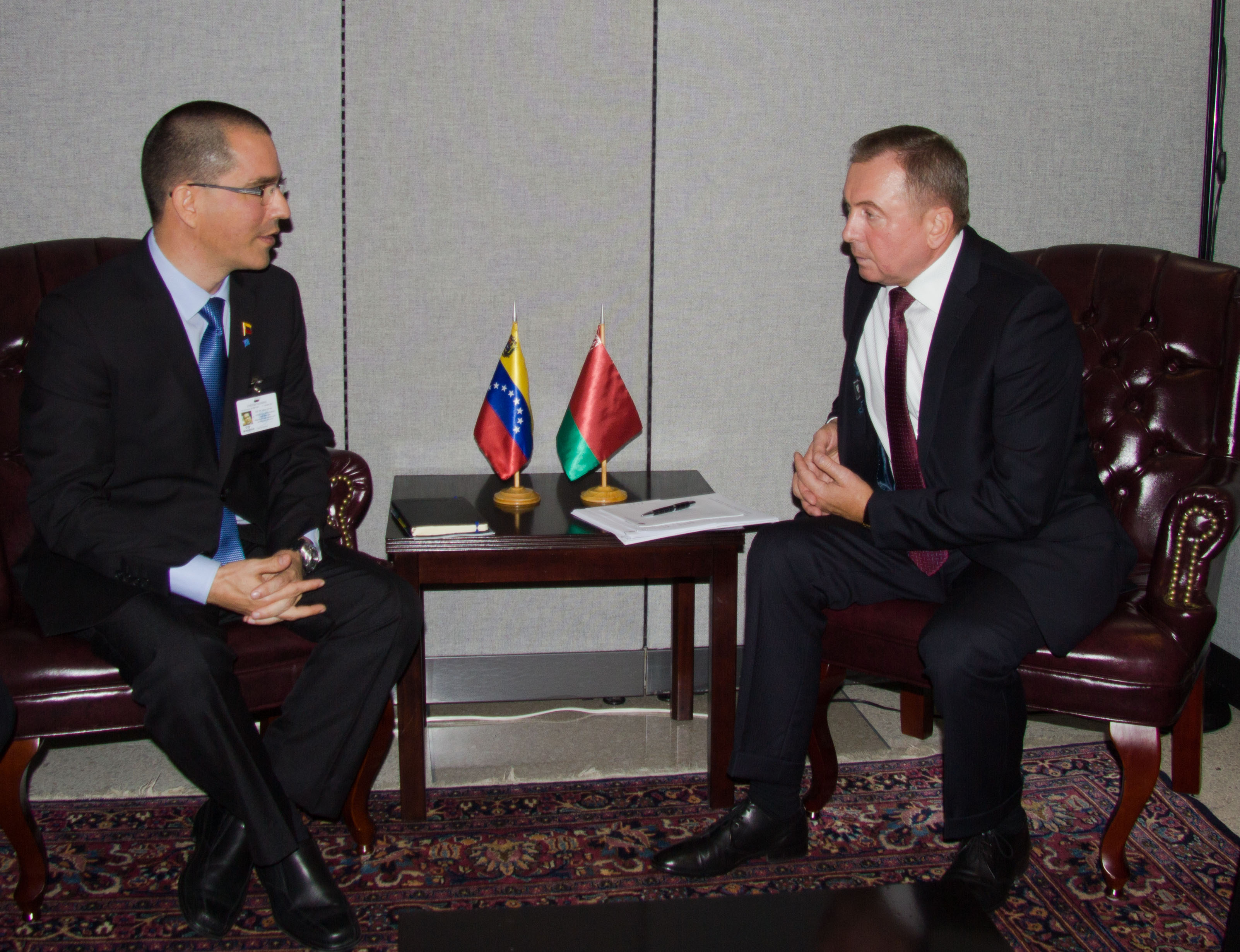 During the conversation with the Minister of Foreign Affairs of Pakistan, Khawaja Muhammad Asif, the need of further maintaining high dynamics of trade and economic cooperation between the states was underscored. The interlocutors discussed the situation in the regions and agreed to develop a number of bilateral events for the near future. 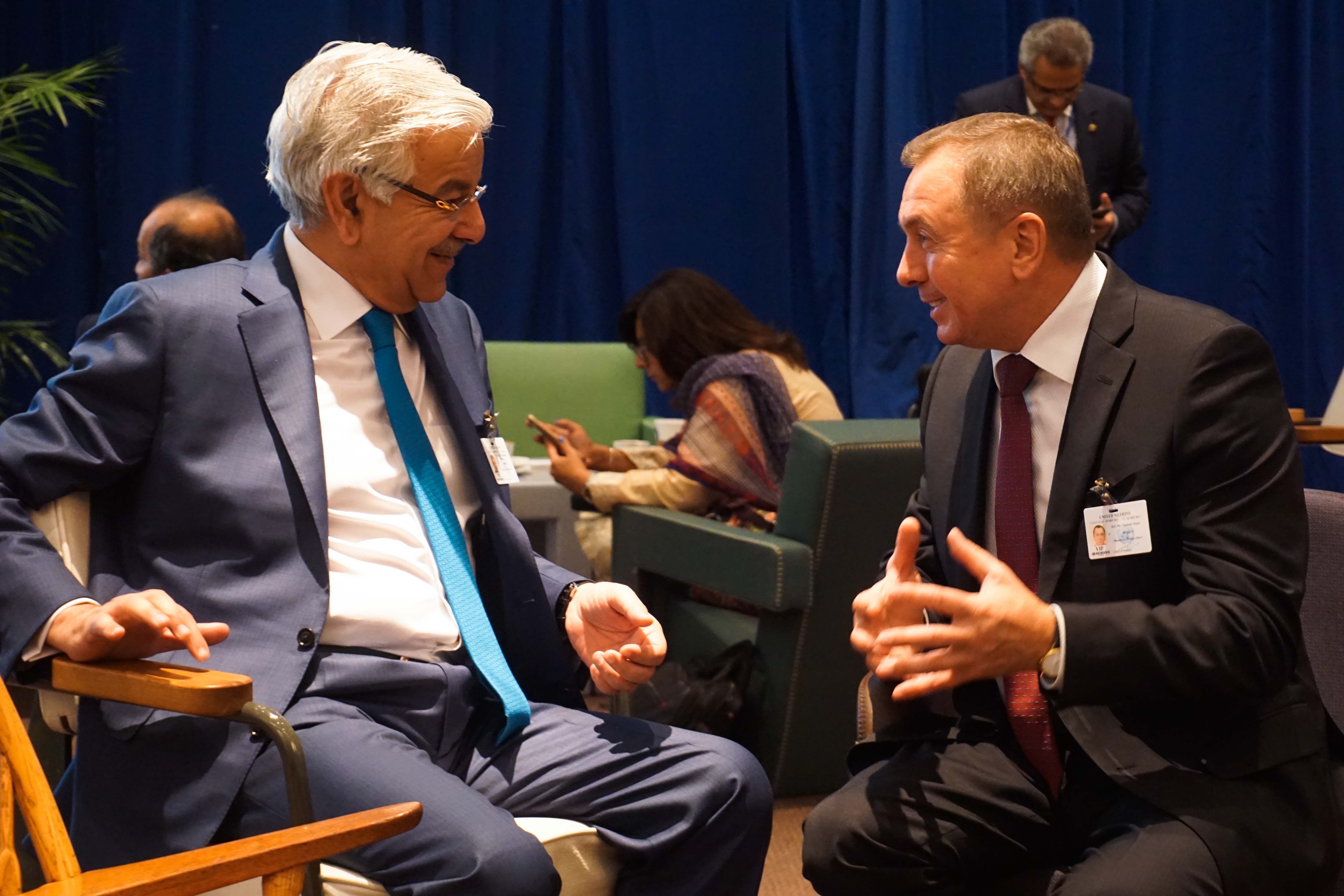 At the meeting with Acting Assistant Secretary of State of the United States Elizabeth Millard, a broad spectrum of topical issues of Belarus – U.S. cooperation was discussed. The parties noted the importance of continuing the process of normalization of bilateral relations and identifying the relevant steps. An exchange of opinions was held on issues of international and regional agenda which both countries prioritize. 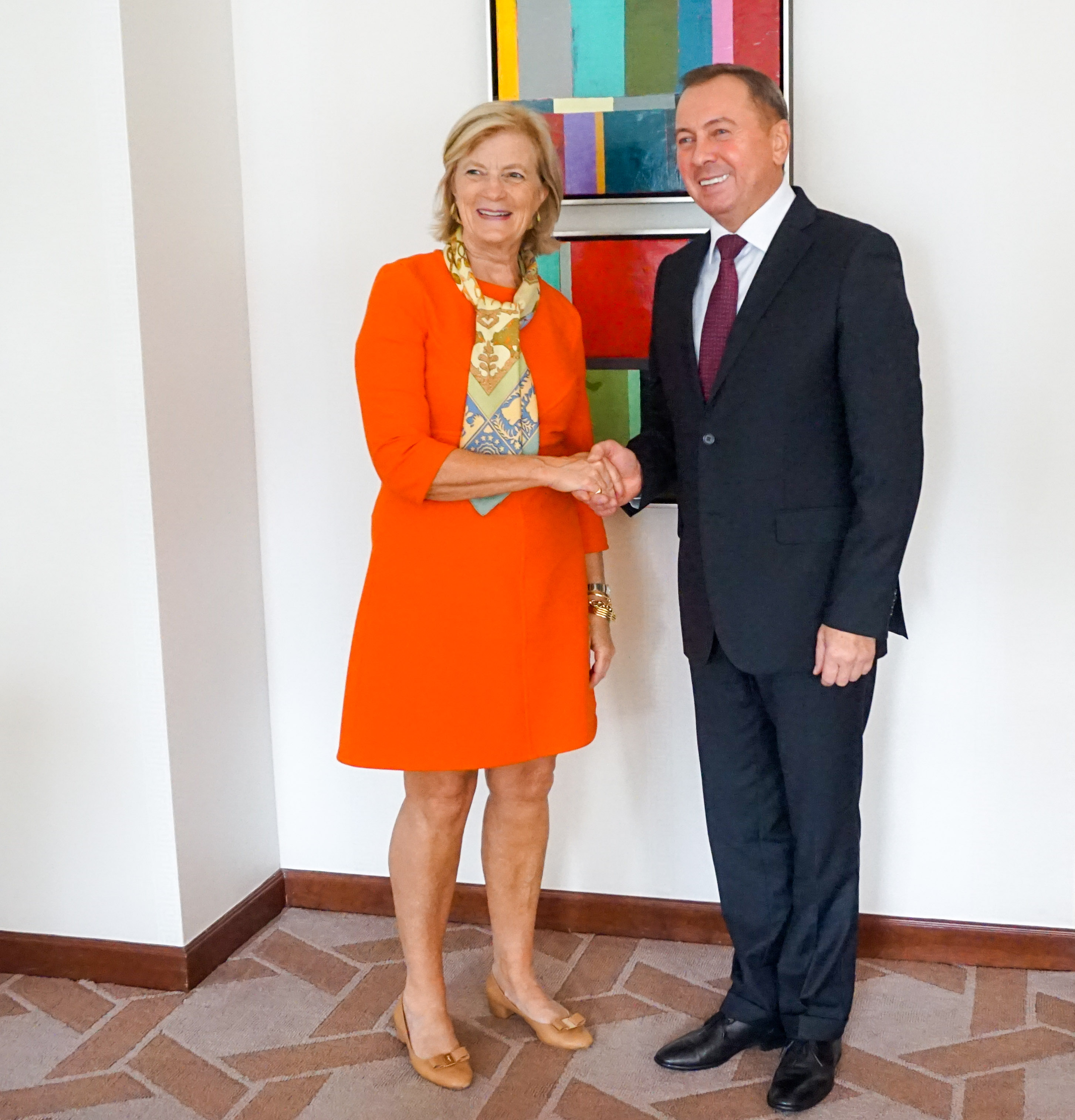 The same day V. Makei gave an interview to the Russian service of the UN Radio, in which he informed on the approaches of Belarus to solving urgent international problems that are in the focus of the UN, as well as priorities of Belarus at the 72nd session of the General Assembly. 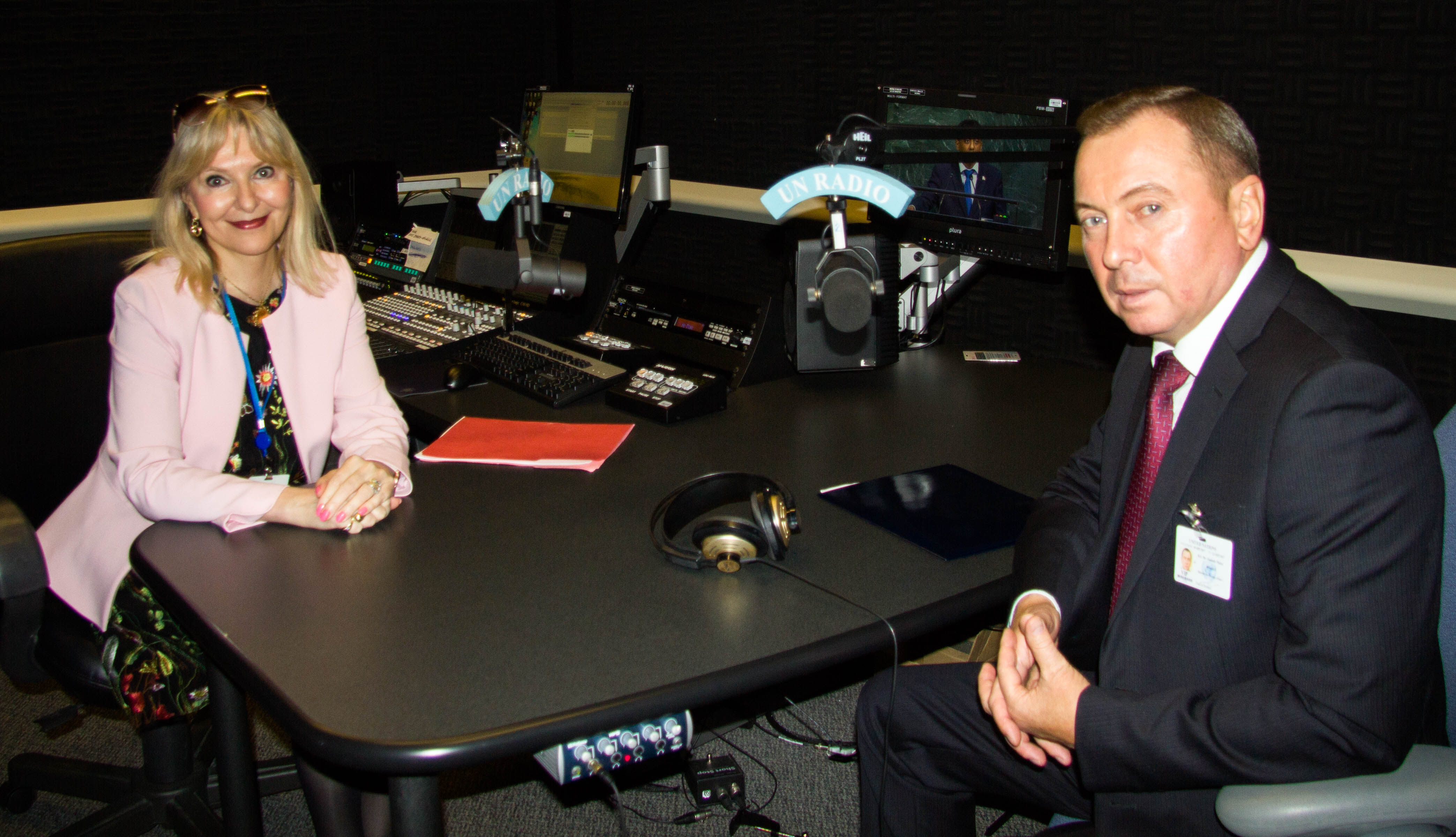 During the high-level segment of the General Assembly, a number of bilateral contacts were held with representatives of the leadership of international organisations, as well as with heads of foreign affairs agencies of separate UN Member States. 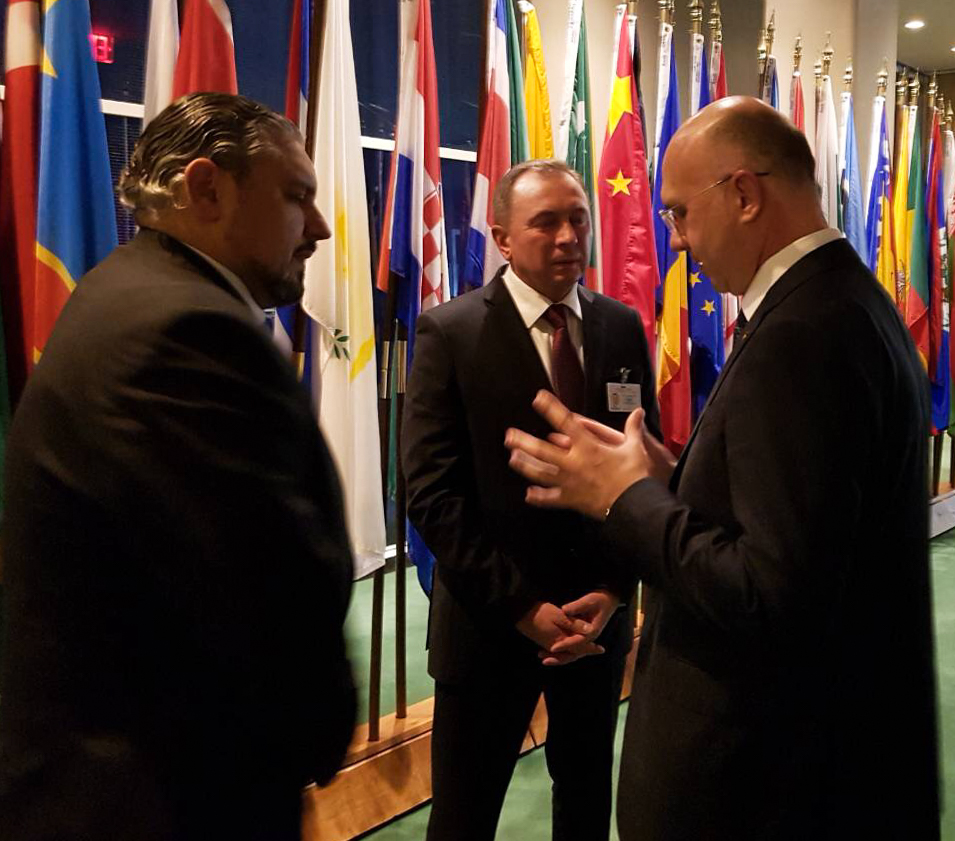 With Prime Minister of Moldova P. Filip and Minister of Foreign Affairs A. Galbur (from right to left) 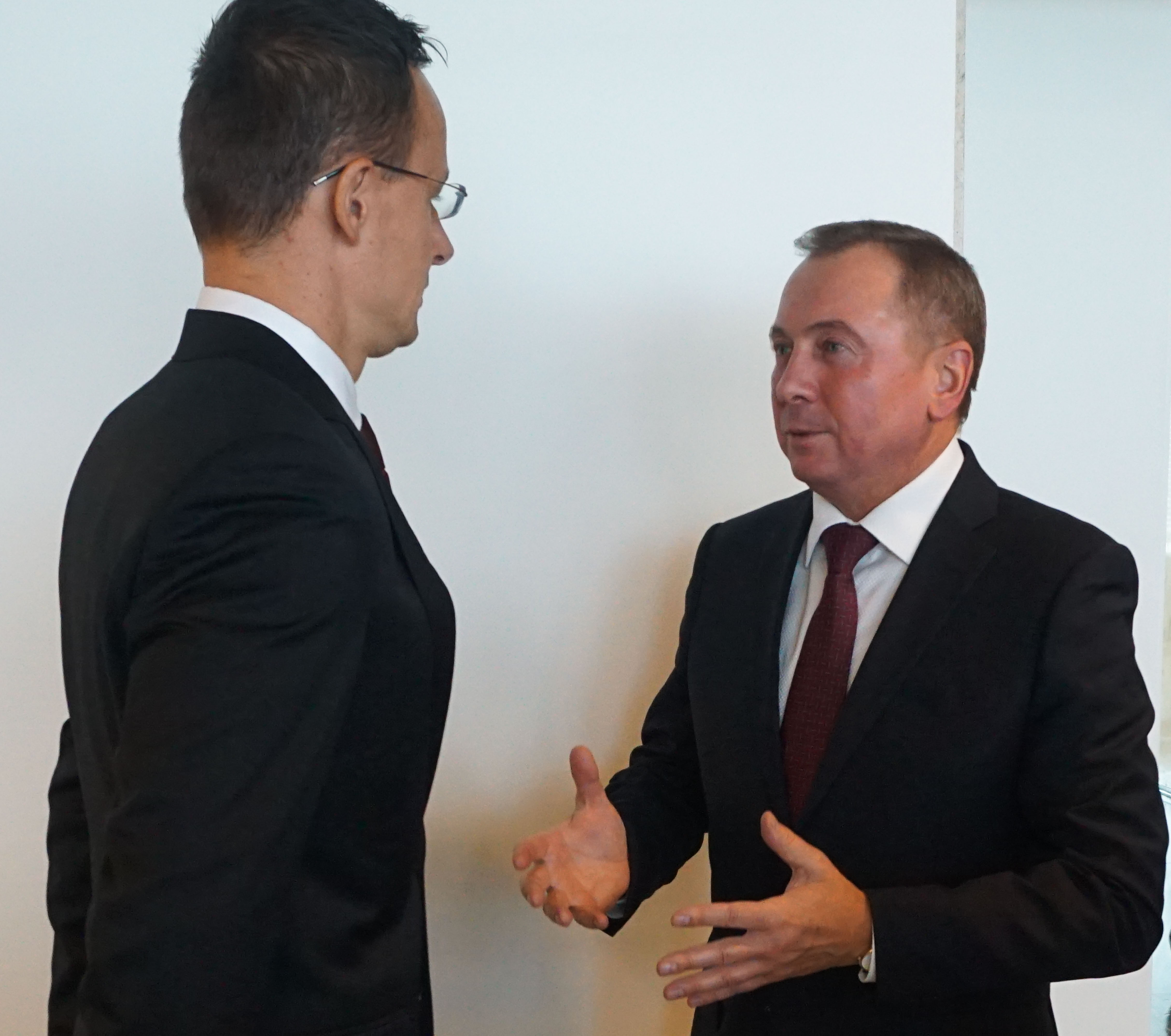 With Minister of Foreign Affairs Péter of Hungary Szijjártó 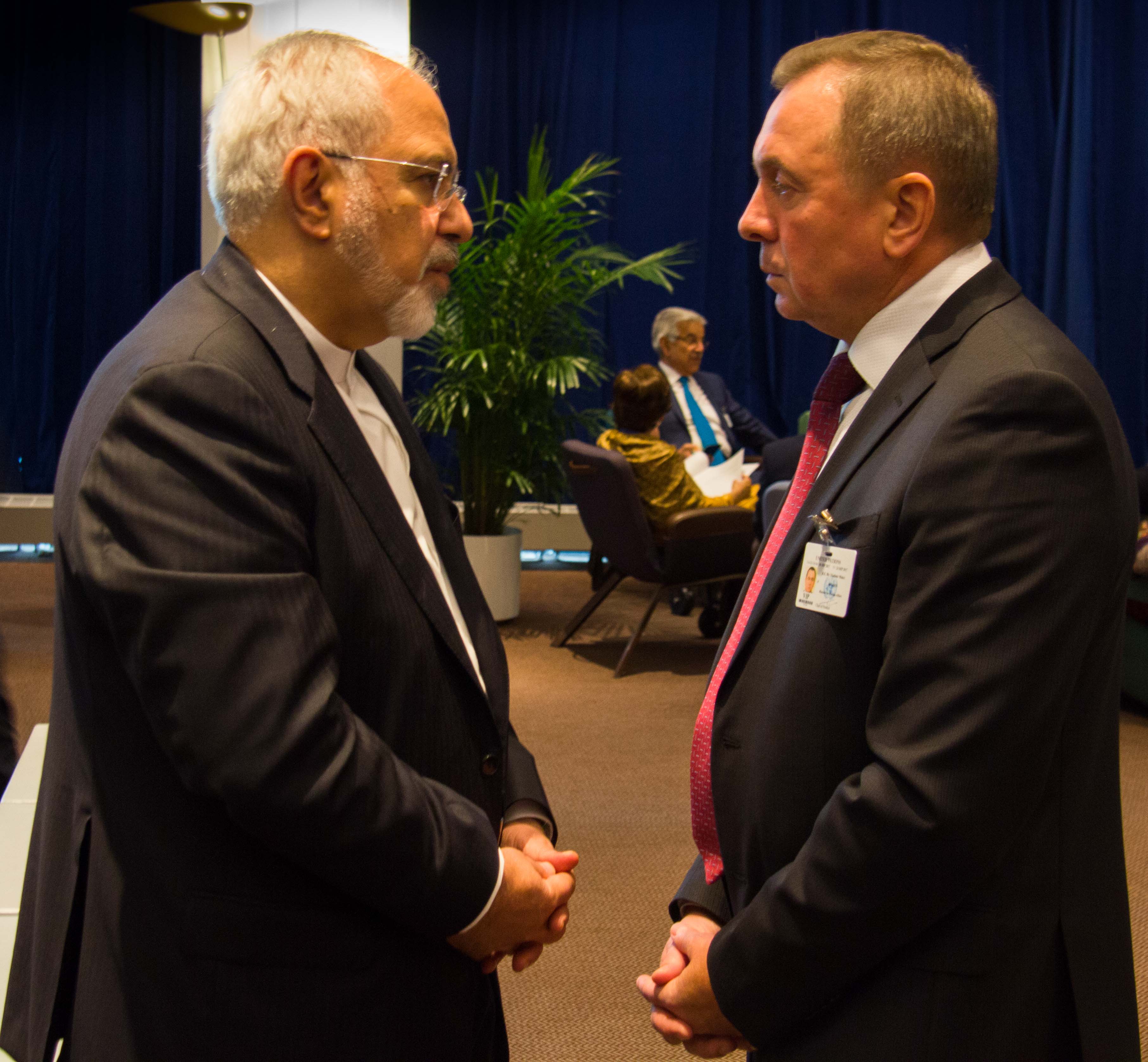 With Minister of Foreign Affairs of Iran M. Zarif 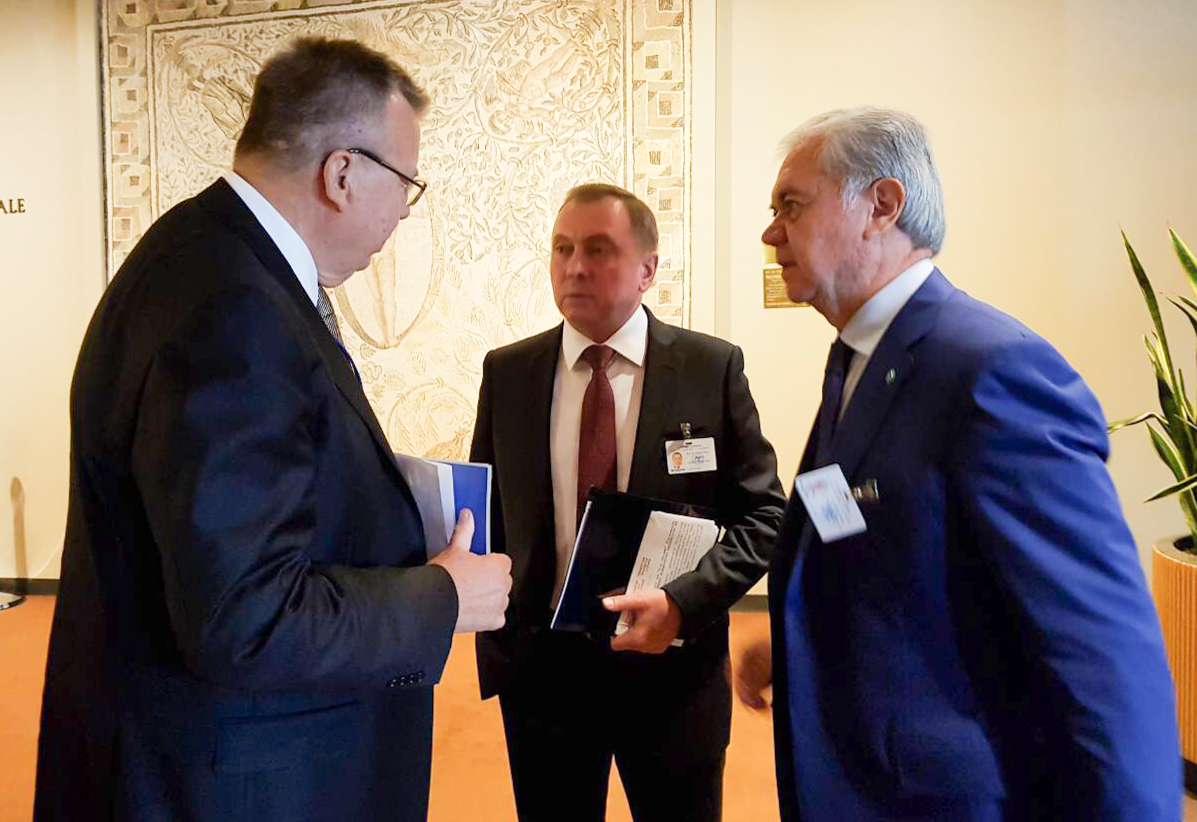