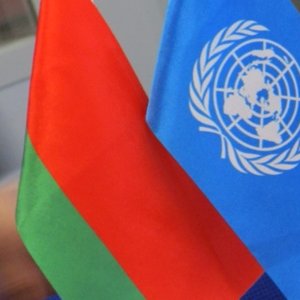 Belarus is a founder of the United Nations, and the Belarusian delegation alongside other delegations that represented UN’ initial Members, signed the United Nations Charter in San Francisco in October 1945. Admission of Belarus, which at the time was not even an independent state, into the newly born global Organization reflected international community’s recognition of the role played by the people of Belarus in defeating fascism.

Despite a considerably more complex structure of international relations that has been taking shape in the wake of the Cold War’s end, the United Nations still remains a vital place for multilateral diplomatic activity.

Participation in the United Nations and its institutions and specialized agencies enables Belarus to more effectively pursue its foreign policy goals that aim to underpin country’s development, as well as modernize its economy.

From a political perspective, through its efforts at various United Nations’ mechanisms Belarus is keen to lay ground for a benign external context that helps ensure national security, sovereignty, its territorial integrity, and which is also conducive to enhancing the country’s international profile.

In the pursuit of this objective, Belarus relies on a set of tools, with the main being the advancement of its major foreign policy initiatives like recognition of the diversity of ways towards progressive development, establishment of global partnerships, fight against trafficking in persons, support of the natural family and some others. These initiatives seek to bolster global efforts against multiple transnational challenges, as well as to the formation of an equitable world order predicated on UN Charter’s principles and widely-recognized norms of international law.

Given the clearly articulated principled approaches of Belarus to ever-rising forces of globalization, increasing conflict potential and instability in international relations, Belarus sees the need to strengthen the UN’s central role in global affairs as an important priority in its engagement with the United Nations. That is why Belarus takes at the United Nations a vehement stand against unilateral approaches in addressing issues of international peace and security, as well as against efforts that undermine UN Charter-based international law. In the past few years, Belarus has become involved in United Nations peace-keeping operations, thereby making a contribution of its own to the maintenance of international peace and security.

Belarus is striving to contribute to the same goal through its activities related to United Nations reform, above all, with regard to streamlining UN’s principle organs like the General Assembly, the Security Council and the Economic and Social Council. UN reform must result in empowering the Organization, as well as its institutions and agencies, with adequate capacities to deal effectively with the implementation of UN Charter’s goals and objectives as the UN confronts contemporary challenges both in the realm of international security and the social and economic area.